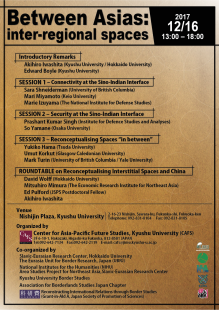 Since 2013, when Xi Jinping announced China’s One Belt One Road (OBOR) initiative, debated has raged about how best to understand the meaning of this puzzling phrase. As Edward Boyle (Kyushu University) emphasised, OBOR involved the repackaging of a series of pre-existing initiatives. Now academics, journalists and policy-makers discuss OBOR as if it were the only game in town. One aim of the workshop ‘Between Asia: inter-regional spaces’, therefore, was to piece together new ways of thinking about the region. In particular, he challenged the participants to examine ‘connectivity between spaces’ and furthermore to explore ‘countries experience of being within that space’.

Session 1 focused on ‘Connectivity at the Sino-Indian Interface’. Sara Shneiderman (University of British Columbia) spoke about the devastating effects of the two earthquakes that hit Nepal in 2015. Using an anthropological approach, Shneiderman explained how the conservative elements of the state have used post-earthquake relief work as a means to regain control that had been lost during the Maoist insurgency. She also discussed how the various relief efforts have increasingly involved cross-border relationships with several countries, but especially China. Mari Miyamoto (Keio University) followed and added to the evidence that for countries at the ‘interface’ of Sino-Indian geopolitics, strategic engagement with these two powers is evermore tricky. Miyamoto’s presentation identified the border spat at Doklam in June 2017 as a recent example of how Bhutan’s government has had to tread lightly in its diplomatic relations with India and China. The session finished with Marie Izuyama’s (The National Institute for Defense Studies, Japan) commentary on the presentations. Among several insights, she pointed the speakers and the audience towards considering whether, or not, the relationship between India and China was becoming more competitive as the ‘buffer’ between the two vanishes.

The second session – with its title of ‘Security at the Sino-Indian Interface’ neatly followed Izuyama’s perspective. Prashant Kumar Singh (Institute for Defence Studies and Analyses, India) argued that the India-China relationship represented a ‘fault line in Asian space’. Citing tensions between the two over the OBOR and Chinese support for Pakistan, the speaker suggested that perhaps the time had come for the idea of ‘the quad’ – meaning greater cooperation on security issues among the leaders of India, the US, Japan and Australia. Osaka University’s So Yamane added to the previous speaker’s remarks about the growing importance of ties between China and Pakistan. Yamane reminded the audience that even an issue as seemingly intractable as the conflict over Kashmir could provide grounds for optimism if the countries involved recognised that they might derive economic benefit from the arrival of OBOR. Nevertheless, as Yamane’s nuanced analysis mentioned, such an optimistic reading coexists with the more pessimistic view of entrenched national interests.

Some of the ways different actors have understood being ‘in-between’ was the topic of the third session. The session began with Yukiko Hama’s (Tsuda University) analysis of the concept of ‘Eurasianism’. Popular among intellectuals in the first half of the twentieth century, the term experienced a revival in the 1990s. Hama identified different groups of actors (some are radical right figures with anti-US sentiment, others are academic political philosophers interested in promoting dialogue with China) who have used the term to reconceptualise different regions of Europe and Asia into an overall construct as ‘Eurasia’. The second presenter was Umut Korkut from Glasgow Caledonian University. He introduced his work on political discourse in Turkey on ‘in-betweenness’ and argued that the Turkish government often likes to present itself as a ‘bridge’ between ‘East’ and ‘West’. The ambiguity of a term like ‘in-between’ is what makes it so appealing to politicians who are able to use it for different purposes such as debating migration diplomacy and devising a Turkish-African partnership. Mark Turin’s (University of British Columbia and Yale University) presentation finished the session. He gave a linguistic analysis of how language categories such as ‘Tibeto-Burman’ are misleadingly used a way of conveying ethnic characteristics. No group or person can speak ‘Tibeto-Burman’ (it is a language group and not a language as such), but the term gets pressed into service to imply cohesion in ancestral origin. Country and language do not align – there will always be examples of those ‘in-between’ such as the large number of people whose first spoken language is in the Tibeto-Burman category but who do not live in either Tibet or in Burma.

The workshop concluded with a roundtable on ‘Reconceptualising Interstitial Spaces and China’. Chaired by Akihiro Iwashita (Kyushu University and Hokkaido University), the discussants (David Wolff (Hokkaido University), Mitsuhiro Mimura (The Economic Research Institute for Northeast Asia, Japan) and Ed Pulford (JSPS Postdoctoral Fellow)), and the audience engaged in a lively conversation about China place in Asia’s Interstitial Space. Wolff provided a historian’s perspective by proposing that China had largely succeeded in eliminating the Russo-Chinese borderland. In effect, China had sacrificed this borderland to remove an ‘endless source of friction’. The leadership in Beijing are now able to turn their attentions elsewhere (such as the South China Sea). Mimura countered that contradictions internal to Chinese society might mean that the country posed less of a challenge to the rest of Asia than is often argued. Pulford then encouraged the audience to think about some of the similarities between Chinese who feel as aggrieved as people living outside of China about the Chinese Communist Party’s engagement with neo-liberal economics. Could there, the discussants suggested, be a fruitful way of thinking about China as the central space between the lines of Asia? Were concepts such as ‘post-colonial’ and ‘post-socialist’ meaningless in this part of the world? Was South Asia a term that needed more attention in any future debate? The fact that the workshop was raising such questions by its end suggested that the organisers’ had achieved their aim of thinking about Asia in new ways, including as an inter-regional space.