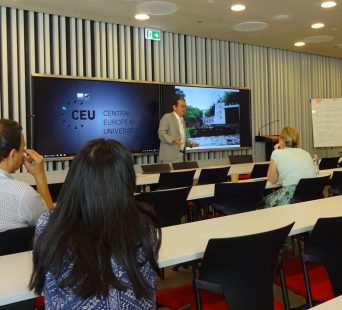 The fourth day of the Association for Borderlands Studies World Conference took place at Central European University in Budapest. Akihiro Iwashita and Jaroslaw Janczak (Adam Mickiewicz University, Poznan & European University Viadrina, Frankfurt) organised the panel ‘Commemorating Modernity? Touring Borders in the 21st Century’. Attended by approximately 30 people, the panel was one of the most well attended over the four days of presentations. The concept of the panel was to discuss cases of border tourism in Europe and Asia. Previous research focussed primarily on the former so Akihiro Iwashita’s contribution was eagerly anticipated.

The subject of Iwashita’s presentation was using border tourism to remake the image of the border. While scholars have long viewed borders as ‘gateways’, such an understanding has yet to be disseminated among the public. Following this introduction Iwashita invited the audience on a ‘tour of the China-Russia borderlands’.

The focus of the presentation was on the tours that Iwashita has led to the China-Russia border in Northeast Asia. Noting that his tour was perhaps the first border tour in history, Iwashita explained that Russia’s decision to allow foreigners to visit borderlands ‘was an amazing change’. He recalled his own experience of Russian border guards detaining and questioning him. He was reminded of this when he saw the guard post now open to tourists.

Iwashita concluded by explaining that although borders can be places of conflict they can also change to become ‘happy places through border tourism’. While border tourism might be more advanced in Europe, there are opportunities in Asia, too.

Iwashita’s presentation was followed by three papers concerned with different European countries. Javier Martin-Uceda (Universitat de Girona) talked about the fascinating example of border tourism across the Spanish/Catalan/French border. In particular, tourism was making use of the regions rich connection with twentieth century literature by the likes of Walter Benjamin and Antonio Machado. Mountain trails based on the treks of exiles meant that the memory of the Spanish Civil War was now being incorporated into border tourism for the first time.

Dorte Jagetic Andersen and Ingo Winkler (University of Southern Denmark) presented their research on cross-border commuting at the German-Danish border. Their presentation style, with Winkler presenting a ‘Talking Heads’ style border commuter’s story, and Andersen giving an analysis of different commuters’ experiences was particularly engaging. Janczak’s paper concluded the panel and he emphasised how border tourism often works through an ‘exoticisation’ of the borderlands. Such exoticisation can be necessary to create economic benefits through branding and establishing a ‘product’.

The audience asked numerous questions including observations about how borders, despite the optimism of border tourism, still often remain sites of antagonism. In his concluding remarks, Iwashita dealt especially effectively with this point by discussing how – from an Asian perspective – borders often go back and forth between cooperation and conflict. The process of encouraging greater cooperation is not a smooth one despite what some of the leading researchers might claim. Through border tourism the process can be moved in the right direction.